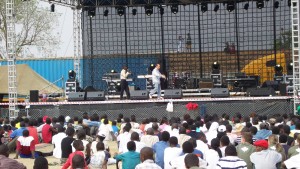 He has taught pastors in pastoral settings and has been actively involved in training youth leaders in Poland and Romania.

Sam has published articles in various church-related magazines and newsletters such as Evangelists’ Fellowship, The Youth Leader, Advance, and the Pentecostal Evangel, and he has been a featured guest on several Christian radio and television broadcasts.

In addition, Sam has served on both the Spiritual Life Committee and the National Evangelists’ Committee of the General Council of the Assemblies of God.